What Do Bosses Want? Begin Work on Time

Yesterday, I conducted a leadership seminar in Salem, Oregon, and the subject of “what do bosses want” came up. Not surprisingly, showing up on time was at the top of the list. Certainly, this depends on what type of job you perform. For example, salespeople and managers are frequently out in the field. Yet, for the person expected to report for work at a specific time, it can affect the morale of everyone if they’re late.

Let’s say that you have an upcoming meeting. Showing up on time needs to be your number one priority if you want to be considered a good employee–even if you’re in sales, work from home, and go out on sales calls. Based on my in-depth conversations with managers, supervisors, human resources personnel, and others in leadership positions over the years, attendance ranks number one when bosses consider whether an employee is a good worker. Many young workers right out of school think they should be judged by the work they do, not by what time they show up for work and leave at the end of the day. However, most managers consider attendance and punctuality to be major success factors.

Attendance also tops the list of criteria when bosses have to fire one employee or another. Included in this first ranking is a factor you might not realize. Do you actually start working on time? Believe me, your boss as well as co-workers notice if you walk in, go to the bathroom or break room, make coffee, chat up a storm, and then finally start working much later. Even if you’re productive, a lot of supervisors worry about starting your work late because of how it affects the morale of others. Some bosses believe if they make allowances for you in this area, they’ll have to make allowances for others. And they don’t want to do that.

What do bosses want? Make sure you show up on time. Like it or not, others are watching you!

CREDENTIALS: Colleen Kettenhofen is an international workplace and leadership expert, award-winning corporate trainer, and motivational speaker. A media veteran, she has appeared on numerous radio shows around the country and has written more than 40 popular articles on diverse workplace issues. Colleen has delivered more than 1,100 fun and entertaining programs in 48 states and six countries. She is the author of 10 published audio programs and the book SECRETS YOUR BOSS ISN’T TELLING YOU.

A Portland, Oregon-based motivational speaker, Colleen Kettenhofen is available for keynotes, breakout sessions, and seminars by calling (971)212-0479, or visiting www.BounceBackHigher.com

In the coming days and weeks, I’m going to be sharing the top traits, qualities and characteristics that bosses want from employees and vice versa. This is based on hundreds of interviews that I conducted with managers, supervisors and CEOs for my book Secrets Your Boss Isn’t Telling You.

Some of the things bosses want from employees will seem like common sense. Then again, as you know, common sense isn’t always commonly applied!

What’s big on their list? Be proactive and solutions-oriented; go above and beyond. When managers, supervisors and CEOs were asked to describe the traits and behaviors necessary for a subordinate to be considered a good employee, overwhelmingly I heard, “Someone who goes above and beyond.” That’s worth repeating: In today’s economy, for you to be considered a “good” employee, bosses expect you to go “above and beyond.” So, if necessary, work longer hours and put in extra effort. If you don’t, someone else will.

Also managers repeatedly asked for “someone proactive, not reactive–an employee who thinks ahead. If that employee experiences problems, he or she looks for solutions.” So to be an exemplary employee, condition yourself to be solution-focused rather than problem-focused.

What bosses want from employees may seem like a lot. In my leadership seminars and keynotes, I always tell managers and supervisors it starts at the top. Be an effective role model. Be the change you want to see.

As a Portland, Oregon-based motivational speaker, Colleen has delivered more than 1,100 fun and entertaining programs before thousands in 48 states and five countries. She has served as keynote speaker for conferences, corporate meetings, associations, Native-American tribes, and non-profits. Colleen is available for keynotes, breakout sessions, and seminars. For more information, please visit www.BounceBackHigher.com

Dealing with Difficult Personalities within a Team

From the overly confident to the overly negative, dealing with difficult personalities is a skill every team member should master.

“Strange is our situation here upon earth. Each of us comes for a short visit, not knowing why, yet sometimes seeming to divine a purpose. From the standpoint of daily life, however, there is one thing we do know: that man is here for the sake of other men.” ~ Albert Einstein

So, you’re on a team. Your team has a mission. The only problem is: your team has people in it. Not just ANY people, people with difficult personalities. You can throw your hands up and scream every time these difficult people rub you the wrong way, or you can learn productive ways of working with them without going insane.

Dealing with Difficult Personalities within a Team? Change Your Own Behavior

Let’s face it; people will not change just because you want them to. As any psychologist will tell you, the only way to change how you feel about a situation (or another person, for that matter) is to change your own behavior in coping. Here are a few examples of difficult personalities and simple ways of dealing with them when working within a team.

The Bully is argumentative, aggressive and intimidating. To deal with The Bully, you will need to avoid arguing with him/her while maintaining control of each discussion. Sometimes, in order to maintain control without fueling The Bully’s flame, you will have to state your opinion clearly, succinctly, and directly and ignore their attempts at trapping you into an argument. In dealing with difficult personalities within a team, face the fact that you will not win in a debate with this person. No one will. It is easier not to incite workplace bullies. And workplace bullying is at an all-time high. How do I know? It’s the topic I’m most frequently asked to speak on when I’m a guest on a radio show.

Negative Nelly sees the unfavorable in every situation. To them, every idea is bad and every attempt at a solution to a problem will result in a negative outcome. Negative Nelly thrives on when he/she can say the following words: I TOLD YOU SO, or, THAT WON’T WORK. No one likes to hear those words. The best way to deal with this difficult person is to avoid discussing solutions with them. When these situations cannot be avoided, try to remain positive and realistic. Assume Negative Nelly will bring the “I told you so’s” along to every discussion and be prepared not to let them get to you. When I conduct leadership seminars and keynotes for corporations and associations, bosses tell me that one of their biggest frustrations is negativity. It’s easy to see why. If it’s not dealt with, it can become like a cancer that spreads!

The Over Achiever or Know-It-All

The Over Achiever seems to know everything. This “Know-It-All” person can spew out “facts” on any given subject. They are similar to the workplace bullies. The Over Achiever likes to stand in the spotlight and wants everyone to “know” how smart he/she is. Many times, it’s just easier not to get wrapped up in conversation with this person to avoid all the know-it-all-ness about them! But, it can be more productive to admit to yourself  (and to them) that they may actually be a great source of knowledge. Ask a few questions and throw in some praise now and then–sincere praise, of course! you may see that their need to “show off” might dissipate a bit once they realize that others appreciate their knowledge base.

The person within the team who is obviously NOT a team player will be the most difficult personality to deal with. The Non-Team Player is the most destructive person on the team. Again, these people are similar to workplace bullies but in a different, “silent” antagonistic fashion. This person does not share knowledge and does not participate well in open discussions. They always seem to be “doing things” behind everyone’s backs”. Everyone questions the motives of this person. The most effective way of dealing with The Non-Team Player is by kindly questioning them in group discussions. Don’t take “I don’t know” for an answer. Force them to participate by including them as much as possible in all team activities.

Dealing with difficult personalities seems to increase exponentially in difficulty when working within a team. It is important to keep in mind that you are all on the same team working towards the same goal. And most importantly, you all NEED each other. Each individual team member’s skill sets and strengths were sought out for a reason: to complete a team. Learn to appreciate what each person has to offer and to work effectively with those who tend to make things a little difficult at times. It may not be easy at first, but in dealing with difficult personalities within a team, it will certainly help in securing your sanity!

It’s like the old cliche’ goes: It takes all kinds of personalities to make the world go ’round!

It is in how YOU deal with them that defines who YOU are (and how you feel)!

Colleen Kettenhofen is an international workplace and employee management expert, award-winning corporate trainer, and conference keynote speaker. A media veteran, she has appeared on numerous radio shows around the country and has written more than 40 popular articles on diverse workplace issues. Colleen has delivered more than 1,100 dynamic and entertaining programs in 48 states and five countries. She is the author of 10 audio programs and two books including SECRETS YOUR BOSS ISN’T TELLING YOU.

A Portland, Oregon-based motivational speaker, Colleen is available for keynotes, breakout sessions, and seminars by calling (623)340-7690. 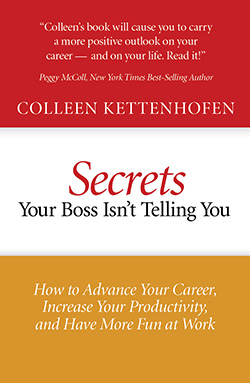